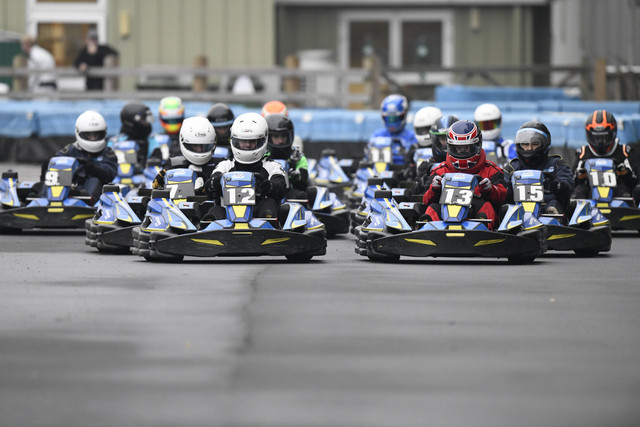 The 2018 Championship would be dominated by young Jake Taplin, after he got off to a slow start scoring just 46 and 39 points in Rounds 1 and 2. He then went on to win 4 of the next 6 rounds to take the title by 18pts. In second, we had Paul Gasson, he would finish the season with 2 round wins after missing Round 1, while in third it was the ever-improving Harry Graham, now while he didn't score a win all year his consistency meant he beat 4th place driver Daniel Hixon by 3 pts to complete our top 3.

This years GPL would be a close battle in both classes, in Heavyweights, it was Alex Jones, Mark Figes and Michael Whittaker fighting it out for the top spot with not much to separate them at every round. But with some good finishes in the last two rounds, it was Jones just pipping Figes to the title by 6pts with Whittaker 17pts further down.

In the Lightweights it was long time Buckmore racer Thomas Langford taking the top spot, he had been trying for many seasons to snatch the title from arch-rival Adam Blair and with Adam having a few issues towards the end of the season, it was Langford’s title to lose and this was something that Langford would never let happen, come the end of this entertaining season he would top the table by 65pts.

After missing the first two rounds Ryan Horton would, in fact, take the Lightweight class title by a clear 30pts, his closest rival being Karun Nadarajah who was in turn just in front of hard-charging Reece Harris. Now, this was a new class for the series in 2018 so the next season might be a tad harder for Horton to retain his Champions status.

Over in the Standards class, it was a one-horse race with Adam Blair dominating all rounds, he would even out qualify the lights on many occasions! With this type of performance, it was no wonder why he ended the season 24pts clear of second place. In second would be Alex Brazier, he would just beat Toby Trice to be Adams closest rival, but it was, in fact, Toby who would give Adam the hardest battles of the year and I’m already looking forward to watching this battle continue in 2019.

Finally, we had our Heavyweight Class Championship, this one would go right down to the wire and wouldn’t even be decided at the final round! It would, in fact, be a few days later when we discovered that the championship would be decided by just one point. Taking the title would be the ever-popular Matthew Hawes who would snatch the winner’s trophy from his good friend James Rudd, in fact, the top 4 drivers in the series would end up just 6pts apart! 3rd would be Neil Strachan while Alex Jones completed a fine season in 4th.

With only 4 rounds this season it was going to be hard to separate our endurance teams this year, at Round 1 it was new team JRG taking the top spot with Outlaws running them close in second. Outlaws would then take the top spot at Round 2 when JRG was a no-show. While this was going on, we had Team Camo, Target Racing and Benedict Racing fighting over the other podium places. At Round 3 we had the return of Brentwood Banta and they would take maximum points away from the others and with Target and Rango missing this round, things got very close at the top. At the final round, it was again Brentwood Banta taking the win by a massive 7+ laps, but even this could not stop Outlaws taking their first endurance title, in 2nd was the always smiling Team Camo and 3rd was eventually Target Racing.